Topinka's son wants Illinoisans to keep her in their hearts 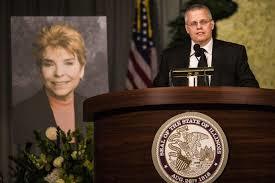 Joseph Baar Topinka stands in front of a picture of his mother.

A former state lawmaker, treasurer and the first female Republican candidate for Illinois governor, Judy Baar Topinka died in December 2014 at age 70, a month after winning re-election as comptroller.

“After she died, everyone had Judy stories, but no one really told her story," Joe Topinka told Prairie State Wire. "In Illinois politics, she was a nine on a scale of one to 10 for being an angel.”

Joe's book, Judy’s Story, is slated for publication this fall by the Hilton Publishing Co., and he helped establish the Judy Baar Topinka Charitable Foundation to “encourage women and minorities to consider a career on public service and politics," her son said.

In its infancy, the foundation would benefit from a portion of the campaign funds Topinka left behind -- an allowable use of the funds under Illinois law -- but they are locked up in a legal battle with her former chief of staff and now lobbyist Nancy Kimme.

In March 2016, a Cook County court dismissed the suit on jurisdictional grounds. The Illinois Supreme Court is expected to decide in October whether it will hear an appeal.

The book, Joe Topinka says, will be an inspiration for young people and, he hopes, used as a study guide in civics classes now required for high school students under a 2015 state law. Course content must include instruction on government institutions, current and controversial issues discussions, service learning and simulations of democratic processes.

“In her life and career she believed in ethics, good government, civility, love of heritage and education,” Joe Topinka said. “That will all be reflected in the book. Next year is Illinois’s bicentennial. Why not celebrate Illinois by celebrating Judy.”

The book will be sold online at www.hiltonpub.com and Amazon. More information on the foundation can be found at www.judybaartopinka.org.