Sen. Paul Schimpf (R-Waterloo) said the budget proposal was a start that may need some tweaks.

“I thought it was a good speech in that it really reminded everybody of the wakeup call that if we want to spend money ... we are going to have to have economic growth in order to do that,” Schimpf said. “The governor mentioned we will not be able to have balanced budgets in the future if the growth of government continues to outpace the growth of our economies.” 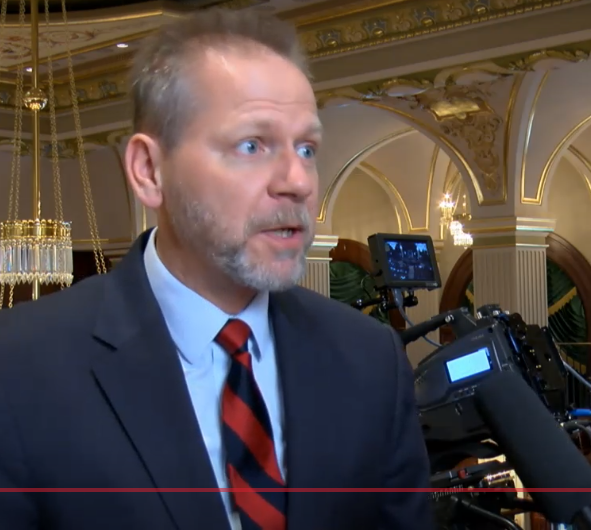 Sen. Dave Syverson (R-Rockford) was also pleased with the plan.

“I thought it was a very good budget and it dealt with the priorities” Syverson said. “One, it is a balanced budget, which we haven’t had for a long time and that is good.”

It also focuses on things that will move Illinois forward including education, job creation and fixing infrastructure, Syverson said, adding he thought it was great framework.

Rep. Robert Pritchard (R-Hinckley) said he was encouraged by what the governor had to say and that he laid out a balanced budget with his priorities.

“Now it will be to the Legislature to deal with those and to see where we can reach some compromise,” Pritchard said. “The most important objective he said was that we need to stimulate our economy and stop the out-migration and loss of jobs.”

“I saw numbers for a truly balanced budget, and we haven’t had that for several years,” Oberweis said, adding the governor laid out some challenging and tough cuts. “If we can just get some bipartisan support and get people together to solve some these problems.”

Reality is what was proposed and will not necessarily come to pass, according to Oberweis, who said it is at least a starting point and stressed again it could work if lawmakers can put aside their party lines.

Sen. Dale Fowler (R-Harrisburg) said he is excited for a sensible budget that meets a constitutional obligation.

“Not only did he (Rauner) propose a balanced budget, but (it) includes a $351 million surplus,” Fowler said, adding he was hopeful for the proposed crack down on crime with 100 cadets being added to the State Police, emergency repairs for parks and schools and the $1 million set aside for a Carroll River Terminal.

Excited was also the word used by Sen. Dan McConchie (R-Hawthorn Woods) when he discussed the budget, he said it will offset the biggest tax increase imposed in Illinois history last year.

“And there was still a deficit that the Democrats put into place,” McConchie said. “The governor did the hard work of saying we need to live within our means and peel back some of this addiction to spending we have, and now it’s time to enter rehab.”

Concern for a balanced budget proposal was what was on the mind of Sen. Neil Anderson (R-Andalusia).

“We haven’t seen balanced budgets in a long time and I think we seen that today, so that is good news,” Anderson said, adding he has some concerns about the cost shifting measures Rauner proposed.

“We can do that, but we have to be very, very careful with that,” Anderson said. “One of the biggest things facing us in Illinois right now is high property taxes and the last thing we want to do is shift that cost to the local counties and municipalities.”

Sen. Chuck Weaver (R-Peoria) kept it short and sweet saying he thought it was an excellent budget address, which the governor kept balanced at this point and was “pleased with how he broke it down,” emphasizing how the governor stressed government must be made smaller.

The governor drew the line where it needed to be drawn, according to Sen. Dale Righter (R-Mattoon), who said there will be no more billion-dollar layover to the next generation of taxpayers.

“One, this budget will be balanced by the time we are done,” Righter said. “And two, we are not going to have any additional tax increases.”

He said if lawmakers do not like a certain component of the budget that saves money, then they need to present a better proposal, because “in the end, we are not raising taxes and we need to balance the budget.”

Sen. Tom Rooney (R-Rolling Meadows) said everyone should remember that Rauner’s proposal was the kick-off for a very long game.

“Nothing that was mentioned today is going to survive the whole game, but what I took away today first off is we are never going to get to a balanced budget if the government is growing faster than the economy is,” Rooney said. “That’s right in my wheelhouse and I perked my ears up every time I hear something like that.”

“It’s balanced at the beginning,” Curran said. “Now priorities that are laid out in it need to be represented by the representatives and senators in the General Assembly.”

“That needs to be the mantra this year – a truly balanced budget this year that is transparent, honest and fair,” Curran said.

However, unlike her peers, Rep. Jeanne Ives  (R-Wheaton), who is running for against Rauner in the upcoming primary, did not feel the budget was balanced at all.

“Gov.r Rauner outlined a budget that relies on the same income tax hike that he promises to ‘immediately roll back’ on the stump,” Ives said in a press statement sent out directly after the address. “And his promised property tax freeze – as inadequate as it is – becomes a massive property tax hike once he pushes pensions back on local districts. Today, Rauner proved again that he has never made a promise he couldn’t break.”