House action on several bills aimed at further restricting firearms in Illinois that were introduced in the wake of the Parkland, Florida high school shootings on Valentine’s Day is expected any day now in Springfield.

Firearms and safety experts say that the bills will do little, if anything, to prevent future mass shootings; and with many of the bills raising age requirements for purchasing firearms, will effectively destroy junior shooting sports programs and competition around the state.

“They have age restrictions language in these bills,” Todd Vandermyde, government relations point person for the Federal Firearms Licensees of Illinois (FFL-IL), said. “Sometimes it’s obvious, sometimes it’s not, but it’s there.” 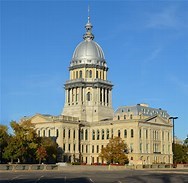 Current state law permits Illinois residents 18 or older to buy rifles and shotguns (long guns), but they must be at least 21 to buy handguns.

Vandermyde said that language in one of the bills would raise the age limit to 21 for a certain shotgun used in turkey shooting if it has a pistol grip stock. The age restriction for buying the same gun with a standard stock would stay at 18.

Separate language extends the waiting period for buying assault weapons to 72 hours. (Current law is 24 hours for long guns and 72 hours for handguns). But a posting on the FFIL-IL website says that the bill contains the same identical broad and confusing definition of “assault weapon” as in another bill, which includes in its definition handguns and .50-caliber rifles.

Under the definition used, anyone under 21 that currently owns an assault weapon must relinquish it within 90 days.

This “includes many firearms used by junior shooters at gun clubs and competitive shooting matches,” the website says.

Another bill would license gun shops, which are already licensed by the federal Bureau of Alcohol, Tobacco, Firearms and Explosives.

“The aim of the language is to put gun owners out of business,” Vandermyde said. “Indiana has a licensing law and it’s done nothing to stem the flow of firearms into Chicago.”

Some House Republicans accused House Speaker Michael Madigan (D-Chicago) and other Democrats of using the shooting tragedy in Florida as a way of distracting voters from other problems within his caucus.

In a story covering the gun restriction legislation, the Chicago Tribune wrote that Madigan has been under fire in recent weeks for his handling of sexual harassment and bullying complaints lodged against two of his top political workers, who have since left Madigan’s campaign organizations.

“It is timely that we talk about this, but let’s not let this distract from Speaker Madigan’s own problems,” the story quoted Rep. Grant Wehrli, (R-Naperville) as saying. “He continues to hide from the accusations within his own organization, and once again is trying to slink off.”

Vandermyde said that the bills will only serve to place more regulations on law-abiding firearm owners.

“The tragedy that happened in Florida was a failure of the system,” Vandermyde said. “The laws are in place to prevent these things from happening. They are not being implemented.”

Want to get notified whenever we write about Federal Firearms Licensees of Illinois, Inc. ?

Sign-up Next time we write about Federal Firearms Licensees of Illinois, Inc., we'll email you a link to the story. You may edit your settings or unsubscribe at any time.