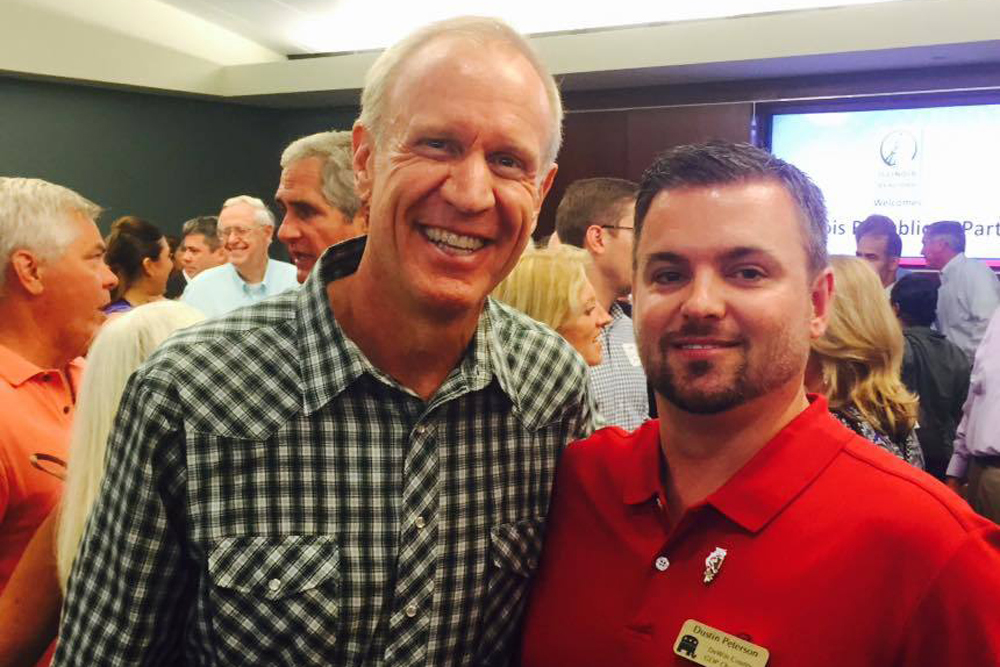 Dustin Peterson, chair of the DeWitt County Republican Party who was challenging Springfield’s Fred Floreth for his Central Committee post in the 13th Congressional District, has a colorful past.

DeWitt County court records show that in 2016, Peterson, 37, was arrested for DUI and committed reckless conduct, a criminal misdemeanor. The DUI charge was dismissed, and he was fined and put under 18 months of supervised probation for the reckless conduct charge.

In 2014, Peterson, an insurance agent from Clinton, was involved in an altercation at a DeWitt County board meeting with Bill Spencer, president of WATCH Clinton Landfill.  Spencer was later found guilty of pushing Peterson after a heated meeting had been adjourned by Spencer's girlfriend, Sherrie Brown, who was board chairwoman at the time, according to a report in the Pantagraph.

Peterson, who considered running for state Rep. Bill Mitchell’s (R-Forsyth) seat, has been chair of the DeWitt County GOP since April 2014. Before receiving $5,000 from Gov. Bruce Rauner in January, the DeWitt County GOP had raised a total of $8,900 over the prior three years, records show. Many conservative and traditional Republicans accused Rauner, a near billionaire, of using his wealth to buy the endorsements of the county and local party groups in his primary run against State Rep. Jeanne Ives (R-Wheaton).

Last March, Rauner was the keynote speaker at the county group’s Lincoln Day Dinner. At the time, Peterson told the Clinton Journal that he was “extremely pleased” with the event as a whole.

Finally, Peterson told the State Journal-Register that he was not running “against Fred (Floreth)” for Central Committee, but that he was running “more just to try to expand my role with the Republican Party, and try to learn more and be more involved and try to, for lack of a better word ... get a little more of a youth movement in there.”

He has since dropped out of the race.

Want to get notified whenever we write about Illinois Representative Bill Mitchell (R-101st) ?

Sign-up Next time we write about Illinois Representative Bill Mitchell (R-101st), we'll email you a link to the story. You may edit your settings or unsubscribe at any time.