Progressive tax not all that Democrats say it is, Dodge says

Jim Dodge argues that progressive tax legislation being backed by a growing number of Democratic lawmakers does none of the things supporters say it will.

“It does nothing to solve the out-of-control spending problem we have in this state,” Dodge told the Prairie State Wire. “More revenue for the state does nothing for the problem of spiraling debt. It sounds wonderful to talk about getting things that someone else has to pay for, but that’s totally unrealistic in terms of being any kind of long-term solution.”

Dodge, an Orland Park Republican running for state treasurer, contends the idea of a progressive tax is so flawed and wrong for Illinois even Democrats don’t really want to see it happen. 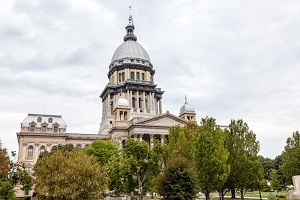 “In an election season, it’s just something else they can talk about,” he said, joining the likes of House Minority Leader Jim Durkin (R-Western Springs) in dismissing talk of a progressive tax as just a political ploy aimed at scoring points with voters.

“The truth is we have to find ways to maximize returns on the taxpayer dollars we’re already getting,” Dodge said. “Structural reforms would definitely be a better course of action to take.”

Dodge added some of the things lawmakers should consider for cutting costs are the consolidation of offices and units of governments, and various forms of tax reforms.

“I think once voters are made more aware of all the things that are happening and all the wasteful spending we’re engaging in, they will demand we get this state going in right direction,” he said.

Democratic gubernatorial candidate J.B. Pritzker has been pushing the idea of a progressive tax for a while and more recently was joined in his crusade by House Speaker Mike Madigan (D-Chicago), who recently introduced a resolution calling for “support of a fair and progressive income tax that must reduce taxes on low- and middle-income families while raising taxes on the wealthiest Illinoisans.”