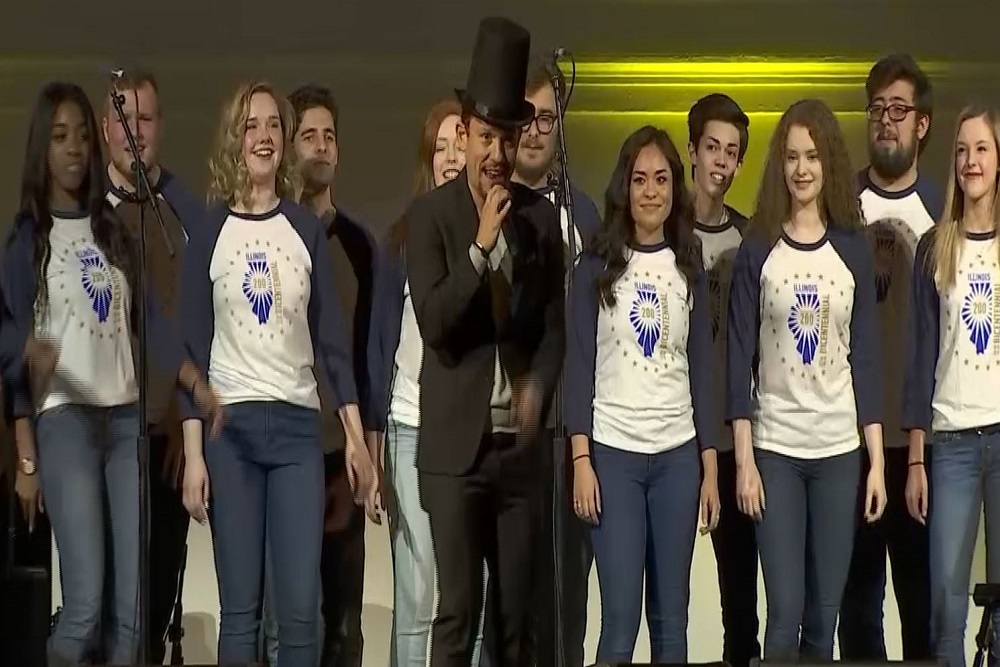 Legendary journalist Bill Kurtis hosted the program, which opened with Wayne Messmer belting out the national anthem and Gov. Bruce Rauner welcoming a crowd of more than 2,300 party-goers.

"Tonight, we recognize some of the great contributions Illinois has made to society and the world." said Gov. Rauner. "The milestones featured during our 2ooth birthday represent opportunities to reflect on our past and understand the great assets our state has to build on for the future. We have a lot to be proud of. and lot to build on."

Rauner noted the contributions of Bicentennial sponsors who made it possible to conduct a year's worth of Bicentennial activities without spending taxpayer money. The key sponsors included Wintrust, which served as the Official Bank of the Bicentennial, Walgreens, Abbott, Boeing, BMO Harris, Illinois Office of Tourism, Comcast and United Airlines.

Act 1 of the program started with features to establish the Bicentennial theme of things Born, Built and Grown in Illinois. While members of the Chicago Symphony Orchestra performed Happy Birthday, Gov. Rauner joined Eli Cheesecake's Mark Schulman to cut a 1,000-pound Honest Abe Apple Cheesecake that was shaped like the Illinois State Capitol. Chicago vocalist Simone Green added a stirring rendition of the Illinois state song.

Governor-elect JB Pritzker also addressed the crowd. "We are celebrating our bicentennial as one Illinois," he said, "ringing in our third century with hope and optimism to build on the progress of our first 200 years."

• In Act 2, members of the Chicago Symphony Orchestra paid tribute to the Bicentennial Honor 200 Veterans with a piece composed by John Williams from the movie "Lincoln."  After a video on Illinois military history narrated by Illinoisan Joe Mantegna, Major General Richard Hayes, head of the Illinois National Guard, recognized Honor 200 veterans from 50 counties.  The members of the Chicago Symphony Orchestra added to the emotion of the segment by performing the Armed Forces Medley.

• In Act 4, Smigel and Wendt introduced video on the birth of the NFL and the Bears. The piece featured legendary Papa Bear George Halas as his grandson, Bears CEO and President George McCaskey, looked on.  The Bears will celebrate their 100th anniversary in 2019.

• Also in Act 4, East St. Louis native and Olympic Champion Jackie Joyner Kersee hosted a salute to Illinois Champions. For the first time ever all six major league professional team championship trophies were together. She focused on the trophies one at a time as spot lights illuminated trophies of the Chicago Bears, Blackhawks, Bulls, Cubs, Fire and White Sox.  Representatives of each of the teams were joined by Olympic Champions and two members of the Women's League Champion Rockford Peaches.

• In Act 5 on History and Culture, the audience was treated to special video tributes to the men from Illinois who became US Presidents. Under the direction of Broadway in Chicago, Miguel Cervantes (Hamilton in Chicago) performed an original composition of the "Gettysburg Rap."  Cervantes was accompanied by Illinois High School Musical Theater Awardees from all over the state.  "I am so excited to be a part of the celebration, to reflect on this historical speech and deliver what will be a powerful message," Cervantes said.

• Act 6 featured Illinois Music with a special acoustical performance by Kevin Cronin of REO Speedwagon.  Cronin reminisced about being from Illinois, "I am thrilled and honored to come home and celebrate Illinois' 200th birthday." REO Speedwagon was named the number one musical band in an Illinois Top 200 Bicentennial survey this past year.

• Act 6 also included a video chronicling the migration of Jazz and Blues from the Deep South to East St. Louis to Chicago showing what a great contribution Illinois gave to the music industry.  The Real Deal of Chicago, Buddy Guy, and his band performed.  Then a number of the evening's performers joined Guy for a finale, ‘Sweet Home Chicago'.

On Dec. 3, 1818, Illinois became the 21st state in the union. The Illinois Bicentennial is a yearlong celebration of what has been BORN, BUILT & GROWN in the state and a reminder of why we are Illinois Proud.