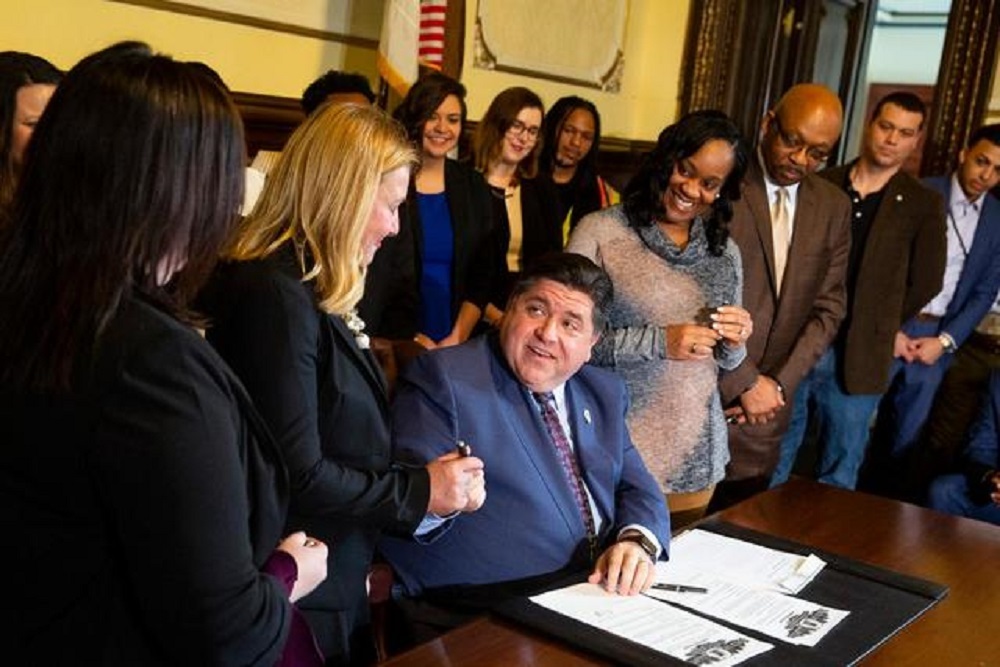 Standing with working families on his first full day in office, Governor JB Pritzker took important first steps to raise Illinoisans' wages by signing a robust initial package of legislation and executive orders designed to raise and protect their wages.

"This administration is putting Springfield back on the side of working families and these measures are a critical first step in the work that will define my administration, especially as we move toward raising the minimum wage to $15 an hour," said Governor JB Pritzker. "On the first day of a new administration, we're enshrining our state's values to create real and lasting opportunity for the middle class.

"For hardworking people across Illinois, know that your state government has your back. Whether it's pay equity for women, prosecuting employers who engage in wage theft, instituting prevailing wage requirements, using project labor agreements, restoring state employees' steps, or promoting diversity in state contracts, these steps are the first of many to take bold action to support working families. This work is far from done, and I look forward to continuing to work with the General Assembly to advance core priorities so working families across Illinois can thrive."

• Require that the Department of Central Management Services and the Department of Human Rights shall review the state's pay plan to eliminate bias generated by asking employees for salary history, which often disadvantages women, particularly women of color. The State of Illinois will no longer ask prospective employees questions about salary history, because of historic salary disadvantages women face.

• Help protect workers from wage theft. The order directs the Illinois Department of Labor to expeditiously handle all cases of wage theft and day labor exploitation, including referring appropriate cases to the Attorney General. This will allow the administration to hold bad actors accountable and protect workers.

• Require that all state agencies comply with the Project Labor Agreements Act.

"As the sponsor of the no salary history bill, I am proud to stand with our new governor today as he takes strong, immediate action to close the gender pay gap and move towards pay equity," said Rep. Anna Moeller. "Governor Pritzker is making it clear to women across our state that they have a staunch ally and advocate in the governor's office."

"Surrounded by workers of all backgrounds, Governor Pritzker is delivering on his promise to stand up for working families with his signature on critical legislation today," said Sen. Cristina Castro. "The action taken by Governor Pritzker today will protect wages, help close the pay gap for women, and improve the wellbeing of thousands of hardworking Illinoisans across our state."

"I applaud Governor Pritzker for taking immediate action to lift up the middle class and those striving to get there," said Mike Carrigan, president the Illinois AFL-CIO. "Signing this package of legislation and executive orders on his first full day in office shows that Governor Pritzker is putting working families first."

• SB 203: The governor signed legislation passed by the General Assembly to protect the wages of workers and promote gender and racial diversity in companies with state contracts. The legislation ensures that the Illinois Department of Labor (IDOL) engages in collective bargaining with local labor stakeholders to establish prevailing wage rates. It also requires the IDOL to release reports on the diversity of workers employed on public works projects and provide recommendations to increase employment of women and people of color on projects.

• Steps: Today, the state will initiate a process to bring state employees to their appropriate salary step level.  Under this measure, union employees, many of whom have not received step increases since 2015, will be placed at their appropriate step for purposes of their pay going forward.  This action does not address significant outstanding issues, including backpay. The administration will continue to work toward solutions to manage taxpayer resources effectively and compensate state employees fairly.