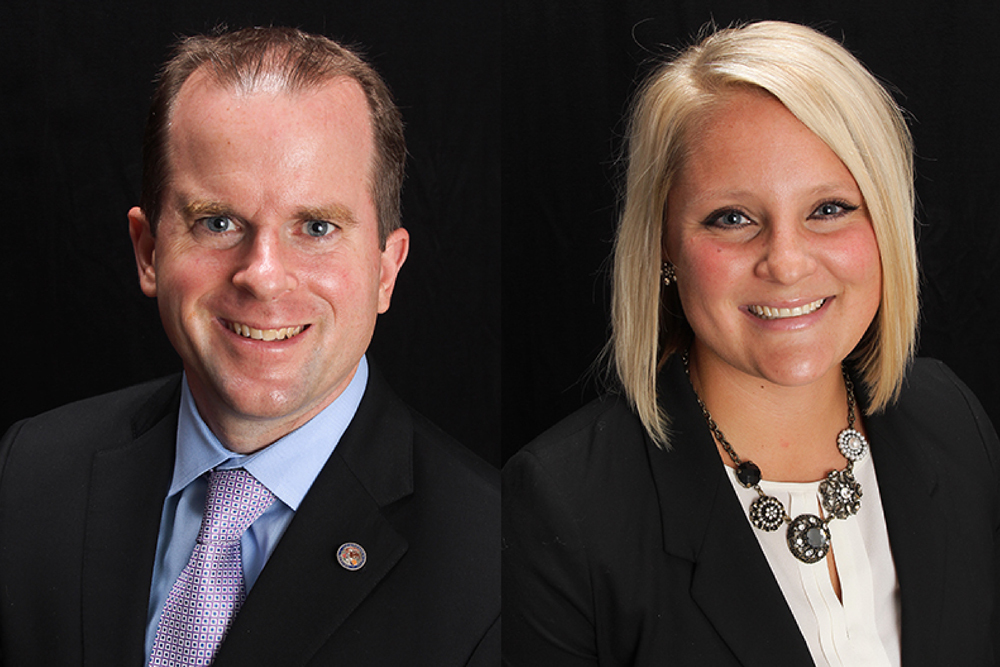 It was a rainy February Tuesday evening in Springfield, and lobbyist Matthew O’Shea was treating State Rep. Robert Rita (D-Blue Island) to dinner.

They dined at Augie’s Front Burner, popular spot five blocks from the state capitol. The tab for Rita’s portion was $16.79.

We know this because O’Shea disclosed it in his lobbyist expenditure filings, required by state law since 2014. What wasn’t disclosed? That O’Shea lives with Rita’s stepdaughter, Sarah Kuhn.

O'Shea, 47, and Kuhn, 34, married this past summer in a ceremony at Gibson's Oak Brook, after several years of courtship.

Kuhn, too, works as a state house lobbyist. She contracts with O'Shea's firm, one of the most prolific in Springfield, lobbying her dad and his House colleagues on behalf of dozens of clients, from state contractors and local governments to casinos, marijuana dispensaries and the energy giant, Exelon.

Illinois Secretary of State lobbyist disclosure forms indicate Kuhn and O'Shea have been working the state capitol together since spring 2015.

The filings don’t indicate, however, that Kuhn’s dad serves in the Illinois House. Lobbyists aren’t required to disclose family relationships with the politicians they are trying to influence.

Her last name-- Kuhn, taken from her first marriage— wouldn’t give it away. Nor Stockle, Sarah Kuhn’s maiden name and the one she uses elsewhere, such as for her state voter registration.

But according to the Illinois State Board of Elections, Kuhn still lives at 2030 High St. in Blue Island with State Rep. Rita and her mother, Cynthia Stockle, a customer relations supervisor with Pace, the suburban bus division of the Regional Transit Authority (RTA).

Kuhn, who worked at Pace in government relations before joining O'Shea, has voted at the Blue Island address 12 times since 2010. That's the year she and her first husband, Brian Kuhn, bought a home together, also in Orland Park, according to Blockshopper.com.

Not that any of this would raise eyebrows in Springfield. It’s not illegal to lobby your father-in-law, or even your father, in Illinois.

Many state political leaders hold it isn’t even unethical.

They include Chicago's, where his father, Michael R. Zalewski, served as 23rd Ward Alderman for 23 years until he resigned this spring after his home was raided by federal authorities as part of a corruption investigation. State Rep. Zalewski has gotten paid to lobby his own father, Chicago Ald. Zalewski, who raised him on the city's Southwest Side before grooming and slating him for the state house.

For as long as his son has been in office, Chicago Ald. Zalewski, 63, has run a lobbying business of his own focused on the state legislature. Last year, he lobbied his son and his fellow House members on behalf of Comcast, the Illinois Retail Gaming & Operators Association, Pace and the Village of Bridgeview, according to Illinois Secretary of State filings.

State Rep. Zalewski, 41, questioned earlier this year about whether his side local lobbying job was appropriate, was incredulous.

Zalewski isn’t the only one seemingly unconcerned with appearances.

Among his many clients, Lowder, 55, a former Madigan staff member himself, represents Lucy’s Place, LLC, a leading video gambling terminal operator with 25 locations across the state. It attracted $114.6 million in wagers over the first nine months of 2019, generating $10.4 million in net income, according to the Illinois Department of Revenue.

Lowder also represents the Transportation for Illinois Coalition, a group of road builders and construction companies pushing for gas tax increases and a massive "capital bill," or state bond issuance to fund new projects, including roads and bridges.

His clients are happy. Last spring, Madigan—and Basham— ushered a doubling of the Illinois gas tax as well as $45 billion of borrowing for construction through the legislature.

“There’s no comparison to previous capital bills,” Michael Sturino, chairman of the Transportation for Illinois Coalition told the Chicago Tribune. “For transportation, this is the largest increase in funding and far overdue.”

It would be a busy session for O’Shea, an Oak Park native who worked as village administrator in the Village of Forest Park, was appointed to serve a six month stint in the State Senate in 2002 and served as chief of staff to Illinois House Republican leader Tom Cross (R-Yorkville) before first registering to lobby in 2011.

O’Shea’s clients include the state's blue chip gambling interests-- Churchill Downs and Midwest Gaming and Entertainment. Between them, they own Illinois’ largest horse track (Arlington International Racecourse) and its largest casino (Rivers in Des Plaines). Both needed to ensure that new legislation wouldn’t adversely impact their existing pole positions.

Coincidences can be commonplace in Springfield. So no one raised a peep when the job of drafting what was being called "landmark" gambling legislation fell to State Rep. Rita, otherwise known as O’Shea’s now father-in-law.

Madigan appointed Rita, who works as a Cook County Highway Dept. truck driver when he isn’t making laws, as lead gambling negotiator, charged with getting a bill across the finish line.

He succeeded. So did O’Shea.

And Bloomberg called the bill a “triumph” for the governor, and O'Shea's clients. They received approval to expand, take more bets and even build more casinos.