The Illinois State Board of Elections (IBOE) held its lottery Wednesday to determine ballot position for the March 20 primary for candidates who submitted petitions simultaneously on Nov. 27, the first day of filing.

On the Republican side, Gov. Bruce Rauner's name will be the first on the ballot since he was the first GOP gubernatorial candidate to file; Rep. Jeanne Ives (R-Wheaton) will be in the No. 2 spot. 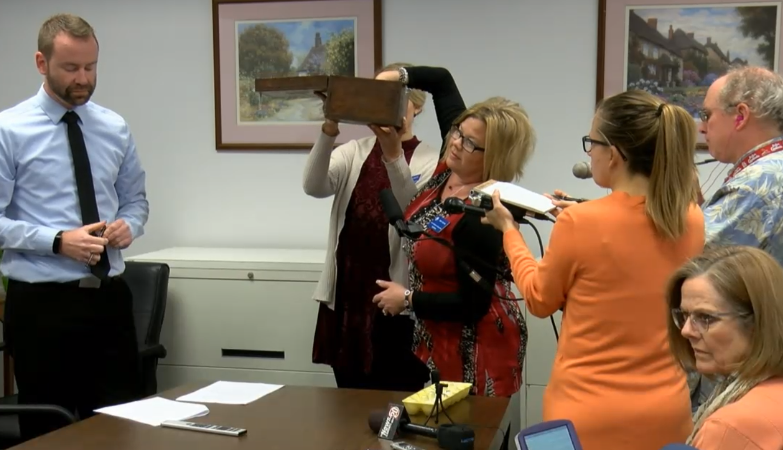 "In order to apply the results of the lottery, we put (the names of) all the candidates who filed at 8 a.m. for their respective offices in alphabetical order,” Brent Davis, IBOE director of lottery operations, said before drawing numbers. "When we draw the first number out, the candidate associated with that number will be listed first on the ballot.”

Davis was asked by a reporter  why plastic balls taken from an egg carton is the method used to determine ballot listing in the age of 21st century technology.

“If it is not broke don’t fix it,” Davis said of the time proven method of the lottery. “We have yet to have any protest for the actual procedures for it.”

Davis, who has been with the IBOE since 2015, said though he has no personal opinion on a name being listed first or last on the ballot, “a lot of people do put a lot of time and energy into obtaining that first ballot position.”

“I would have to assume there is something to it,” Davis said.

Being the first in line, with some candidates waiting overnight to claim the No. 1 spot, makes no difference, according to director.

“There is technically no point, and I think it is related to bragging rights for being the first in line," Davis said. "As far as who is in the front of the line and back of the line for those 8 a.m. filers, it makes no difference. Everyone is treated exactly the same.”