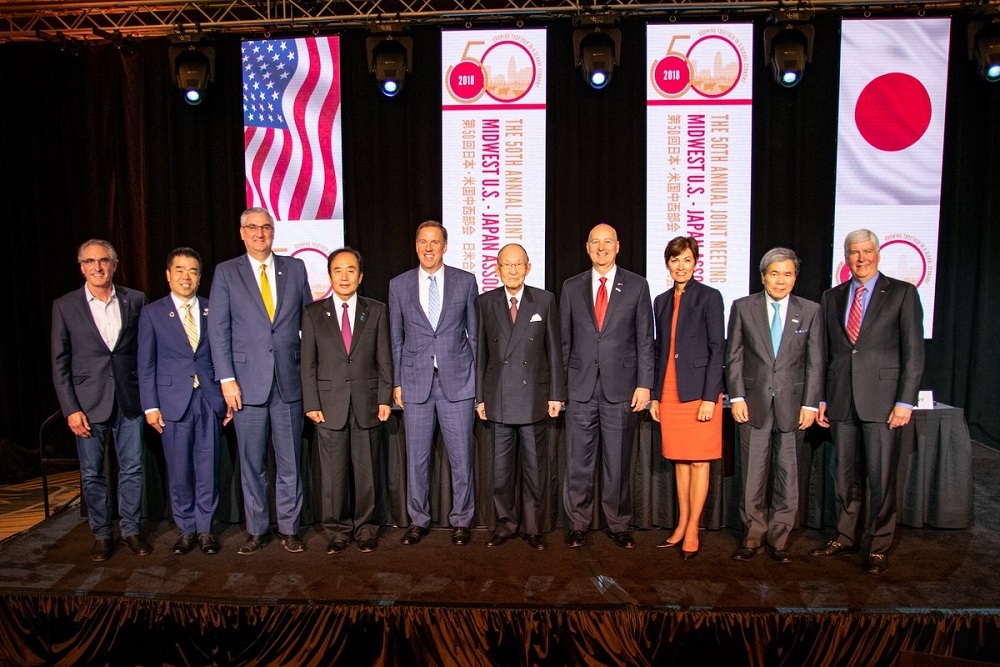 Gov. Bruce Rauner touted Illinois' workforce, infrastructure and world-class universities at the 50th Anniversary of the Midwest U.S.-Japan Association Conference (MWJA). The governor, who has attended the conferences the past three years including last year's held in Tokyo during his first international trade mission to Japan, delivered remarks to hundreds of business leaders and elected officials at the conference in Omaha, Nebraska. Rauner was joined by seven Midwest governors, four Japanese prefecture governors, the Japanese ambassador to the U.S., H.E. Shinsuke Sugiyama, the Japanese Consul General to the U.S., Hon. Naoki Ito, and Japan External Trade Organization Chairman Hiroyuki Ishige.

"Conferences like the MWJA provide an important foundation for an exchange on the issues of the day, but also further build our personal connections to define what tomorrow will look like," Rauner said. "The results of such a strong friendship are illustrated in the fact that Japan has had more growth than any other country in Illinois over the past few years, with a 16.2 percent increase over the past five years."

The governor added the state is "open for business," and discussed the depth of experience in working with foreign firms. Illinois is home to over 1,900 foreign firms operating at 5,600 locations. These firms collectively employ over 350,000 Illinoisans, with more than 180,000 in the manufacturing sector.

Among the Japanese companies that expanded in Illinois in 2017 and 2018 are Toshiba Machine Co. in Elk Grove Village, Sodick Inc. in Schaumburg and Okabe Co. in Grayslake.

"Illinois ranks first in the Midwest with 630 Japanese business facilities in over 1,030 locations, which employ 47,000 people across the state," said Consul-General Naoki Ito. "We value Gov. Rauner and the State of Illinois' unwavering and important support of this conference and we look forward to furthering this partnership that transcends business, education and culture."

This year marks 50 years since the first meeting took place in Chicago. A delegation from Japan's economic development committee met with representatives of the Chicago Association of Commerce and Industry.

"We are honored to have Gov. Rauner attend the MWJA conference this year particularly since we are celebrating our 50th anniversary of this forum that started in Illinois," said MWJA Executive Director Marie Gaudette. "The governor and the State of Illinois have always understood the importance of developing business relationships to strengthen the cherished partnership between Illinois and Japan."