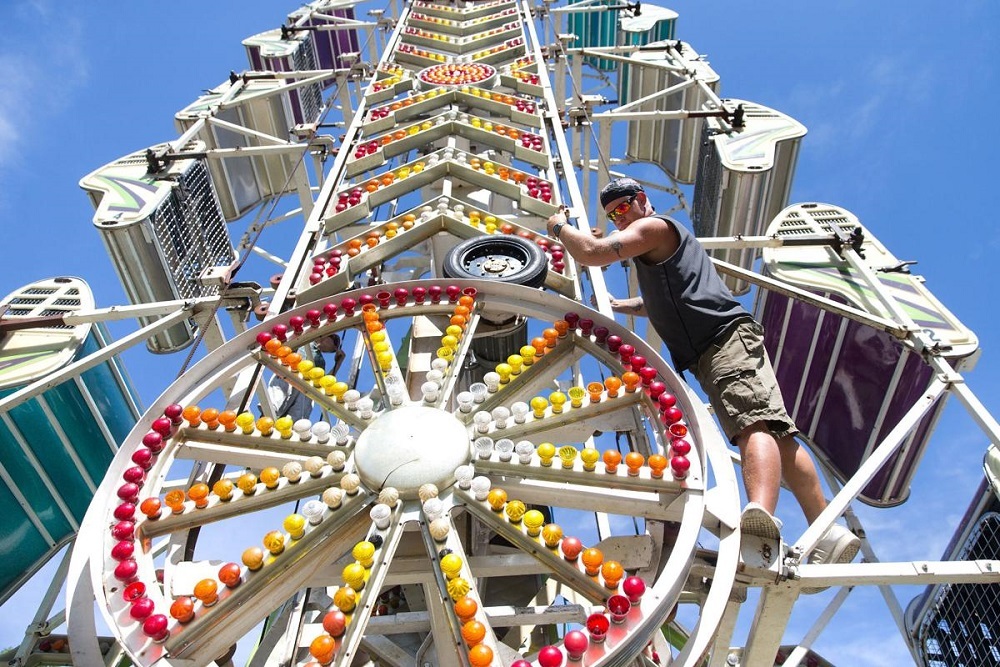 Illinois Department of Labor issued the following announcement on June 27.

It's finally summer and carnival and fair season is nearing its peak. That means lots of fun for people and lots of work for the amusement ride safety inspectors of the Illinois Department of Labor.

Beginning in 1985, largely in response to some tragic and high-profile mishaps involving amusement rides in Illinois, the state began regulating and inspecting all amusement rides and attractions that are open to the public. That includes everything from roller coasters to mobile climbing walls to bounce houses.

People are often surprised the Department of Labor oversees such a program, but Director Michael Kleinik says an important mission of the department is safety. For example, the department's Illinois OSHA division strives to keep workers safe.

"And our amusement ride inspections role is to make sure that the public can attend these fun events knowing the rides and attractions have been properly inspected," said Kleinik.

There are five full-time amusement ride safety inspectors for the state of Illinois, said Tom Coe, chief ride inspector, who administers the program and fills in as a sixth inspector when necessary. "I always joke there are 5 1/2 counting me," he said.

That relatively small cadre of inspectors is responsible for overseeing the approximately 630 companies who operate various rides and amusement attractions throughout Illinois. They complete between 4,500 and 5,000 equipment inspections each year.

"The problem is that the attractions are not spread out throughout the year," said Coe. "There is a significant portion of them focused from the last week in April to the first week of July. That's probably 75 percent of our inspections."

And Illinois is not a small state. "We run from border to border, from east to west, north to south," said Coe.

Besides the immense geographic area that must be covered, growth in the amusement industry also has created more work. Even the smallest festivals today seem to offer a bounce house or two for kids to enjoy. They all need to be inspected.

"The bounce houses have been an exponential increase," said Coe. Some people may question why something seemingly as tame as a bounce house needs to be inspected. But Coe said nationwide statistics indicate bounce houses pose a significant injury rate compared to other amusement attractions.

"It's not necessarily the equipment that causes the injuries but the operation of the attraction. Too many people using it at one time, and mixing the size of people using it," said Coe.

Whether it's a bounce house or craziest ride on the midway, you should look for the permit-to-operate sticker issued by the Department of Labor to be assured the ride has been inspected.

If you determine no permit was issued or to report any accidents or unsafe conditions you observe with an amusement ride or attraction, you should call the Department of Labor during business hours at 217-782-9347 or after hours at 217-299-5512. You can also submit a complaint online at the department's website at www2.illinois.gov/idol

While the Department of Labor is empowered to issue fines for failure to comply with the Amusement Ride and Attraction Safety Act, fines are not the goal. Safety is. "The majority of the time, we have absolutely no problem with company's complying," said Coe. "Our intent is to get people compliant with the law."

For more information about the Illinois Department of Labor, visit the website at labor.illinois.gov. IDOL can also be found on Facebook at Facebook.com/ILDeptofLabor or on Twitter @ILDeptofLabor.

Want to get notified whenever we write about Illinois Department of Labor ?

Sign-up Next time we write about Illinois Department of Labor, we'll email you a link to the story. You may edit your settings or unsubscribe at any time.