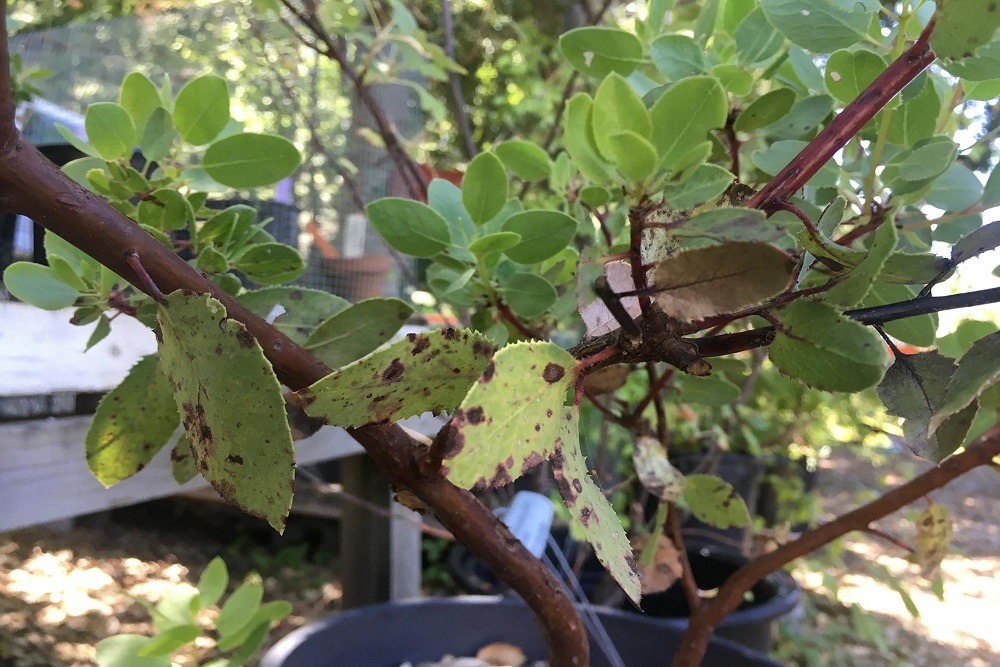 Illinois Department of Agriculture issued the following announcement on July 2.

The pathogen which causes Sudden Oak Death, a plant disease that has killed large tracts of oaks and affected many native plant species in California, Oregon, and Europe, has been found in Illinois.

Phytophthora ramorum, the causal agent of Sudden Oak Death (SOD) has been confirmed in ornamental plants at ten Walmart locations in Cook, Jackson, Jefferson, Lee, Macon, Monroe, St. Clair, Stephenson, and Will Counties, and one Hy-Vee location in McDonough County through cooperative efforts between IDOA and USDA, as well as diagnostic support from University of Illinois, Michigan State, Cornell, and Kansas State Universities, and USDA labs.

The issue was first uncovered by an Indiana confirmation at a Walmart in late May on rhododendrons from Parkhill Plants in Oklahoma, which sourced the plants from nurseries in Washington and British Colombia. Shipping records were provided to IL officials shortly thereafter. 18 states in total received these plants.

IDOA and USDA field staffs began visiting identified sites in late May inspecting the plants with a primary focus on rhododendron as the main suspected carrier of the disease, but also inspected other known host plants such as azalea, viburnum, and lilac.

Symptomatic plants were sampled for diagnostic testing and placed on stop sale order pending diagnostic results or destroyed or relinquished to officials on site. Collected plants are being safeguarded by IDOA for later approved disposal. Though Sudden Oak Death affects oaks and other trees and plants, it poses no threats to humans, pets, livestock, or food sources.

Positive confirmations have been made on the following plants and varieties in Illinois and/or other states to date:

The above varieties may not be the only plants affected as the disease can infect more than 100 different species. In general, most plants will get "ramorum blight" as carriers, however oaks are considered terminal hosts as it can often be fatal.

Diane Plewa, diagnostician at the University of Illinois Plant Clinic, says "The pathogen can cause both a blight and sudden death, depending on the host. Because P. ramorum has only been detected on non-oak hosts, the disease Ramorum blight has been confirmed in Illinois but not the disease Sudden Oak Death. Currently, there is no evidence that any oak trees in Illinois are infected at this point".

The pathogen travels well in soil and water, so escape into the environment is a concern. Blight symptoms of the disease include, but are not limited to, foliar spots, browning or wilting leaves, tip/shoot dieback, and brown or black discoloration on stems and/or trunks. For more details and photos, please visit http://www.suddenoakdeath.org/diagnosis-and-management/hosts-and-symptoms/.

Walmart and Rural King are participating in voluntary recalls of the potentially infected plants remaining at their sites. Scott Schirmer, State Plant Regulatory Official at IDOA says "These situations are never easy, but when industry recognizes the severity of the situation and cooperates to help address the issue, it's a tremendous asset to the overall response effort. However, it is also important to have cooperation from residents who may have purchased these plants to get an idea of what may already be planted in the Illinois landscape."

Because the disease is incurable, Illinoisans are encouraged to contact the Illinois Department of Agriculture or their local University of Illinois Extension office for further guidance if they have purchased rhododendrons from Walmart, Hy-Vee, or Rural King since April, and if those plants are looking symptomatic or in poor condition. The most likely source of infection would be plants purchased this spring; older, established plants are not very likely to be infected with P. ramorum. It is not recommended to destroy or dispose of these plants without State or Federal guidance. This is an ongoing investigation, guidance and recommendations may change.