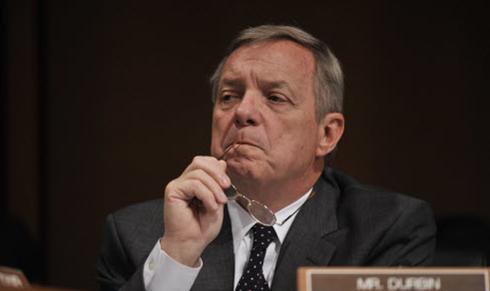 Instead of working with the Republicans in the Senate, U.S. Sen. Tom Cotton (R-Arkansas) says that Democrats are instead working behind closed doors and demanding cash handouts to the airlines, and U.S. Sen. Dick Durbin (D-IL), who, he says is demanding cash for Illinois and Chicago, both of which have serious financial issues they are dealing with.

Cotton slammed Democrats for not even debating the federal stimulus package in the Senate in remarks on March 23. Cotton questioned what the Democrats were even doing, as they were not in the Senate chamber at the time of his remarks.

“Democrats won’t even start a debate on legislation that would help the American people and our economy survive this crisis, that would provide 3,000 to most Americans, that would provide extra unemployment benefits to the millions who have lost their jobs and who, regrettably are going to lose their jobs,” Cotton said. “The legislation would provide loans to small and medium-sized businesses so they don’t have to lay off workers as they struggle to pay the bills; it would help industries that have been devastated by this crisis – like the hotel industry, when thousands of Americans clean the rooms, cook the food, all of whom need help."

Cotton said that Democrats won’t even start the debate on legislation meant to solve this problem and that it has happened twice.

“They haven’t voted to defeat legislation. They haven’t even started," Cotton said. “Earlier today, Susan Collins took the floor to speak and Chuck Schumer blocked her. Probably because he was afraid of what she had to say. And probably, just like there are no Democrats here right now, they know they don’t have anything to say. They have no case to make.”

Behind those closed doors, Democrats are demanding straight cash bailouts for states and cities that have been fiscally irresponsible for years.

“We simply say they have to repay the money on the backend,” Cotton said. “Why would they not even start debate over the last 18 hours? Why would they risk your lives and your loved ones lives and your retirement savings? Now we know. Nancy Pelosi is circulating a 1400 age bill that she says will save the country from the crisis. It’s almost three times as long as our bill."

He reiterated that Democrats attack Republicans for wanting large bailouts for corporations, which he said is not true.

“Any large company that borrows money from the treasury or takes advantage of federal reserve programs will have onerous terms and lots of strings attached as well," Cotton said. “Democrats are demanding free cash giveaways for major corporations and they have the nerve to accuse us of bailouts?”